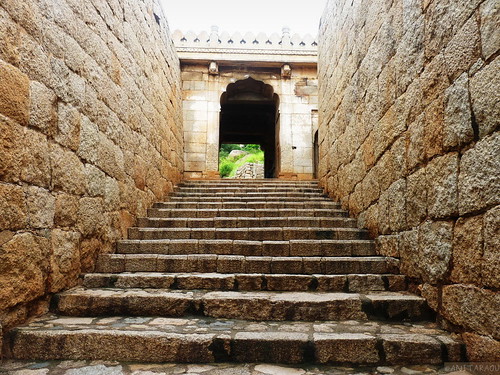 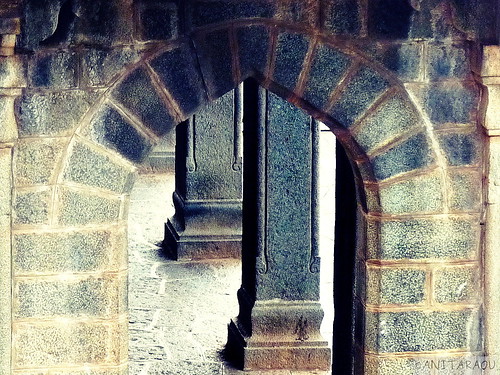 For Nancy Merrill’s A Photo a Week Challenge 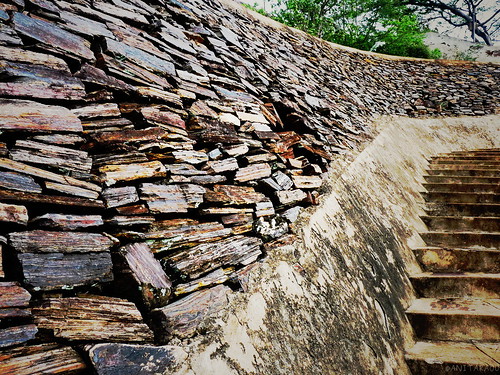 Some textures totally catch the eye — like this one did mine. 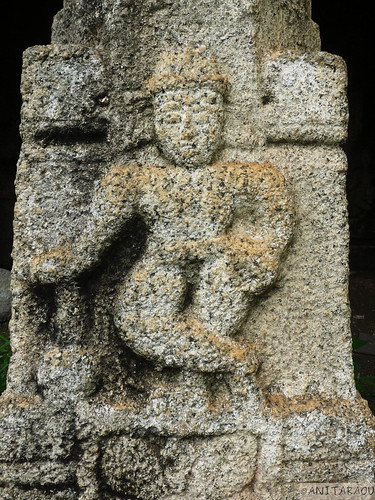 Seen at Chitradurga Fort, a well-known site in Karnataka (the state where I live) with quite a history, and associated with legends in the Mahabharata, an epic dating back centuries before our time.. 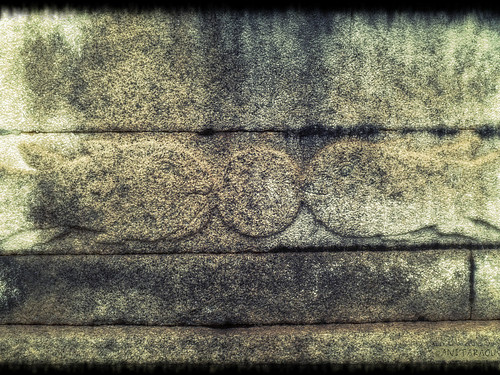 Look at these two. I don’t know what game they’re playing, but one of them seems really grumpy and so done with the whole thing, while the other seems really cheerful and chirpy!! 🙂 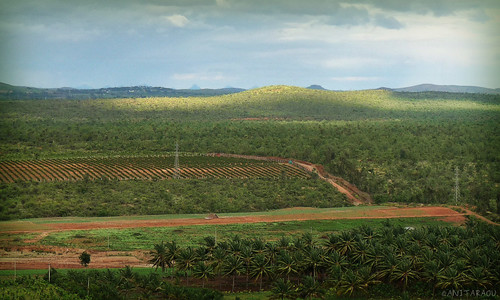 As seen from the top of the Vani Vilas Sagar dam at Chitradurga. The greenery, the farms, the hills, the patches of sun drifting along the landscape — it was all so mesmerizing and soothing that I almost forgot to click a picture!

Cropped in a 5:3 ratio and a wide vignette added. 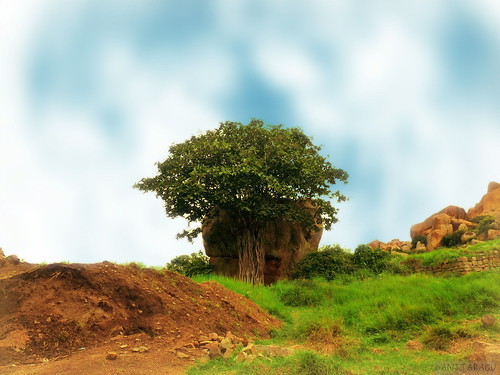 Summer’s supposed to start between March and April in India, but it’s already pretty hot here in Bangalore. There are short spells of pleasant weather at times, when one can dare to leave the comfort of air conditioning and venture outside during the day. Well, this just makes me wonder how we’ll manage by the time ‘real’ summer arrives….

I clicked this picture at Chitradurga on a super-pleasant day — just the kind Bangalore used to have, and the kind I’m missing right now.

This is the final version of my photograph in a very fun and experiment-filled month for the One Four Challenge series hosted by Robyn. After last week‘s color splash, I decided to do a muted-color version of the path that I clicked at Chitradurga.

While I was trying out things, I had this thought on making a ‘night’ version of the scenery, with all discernible colors dulled and replaced with some sort of moonlight effect. And this is what I came up with – 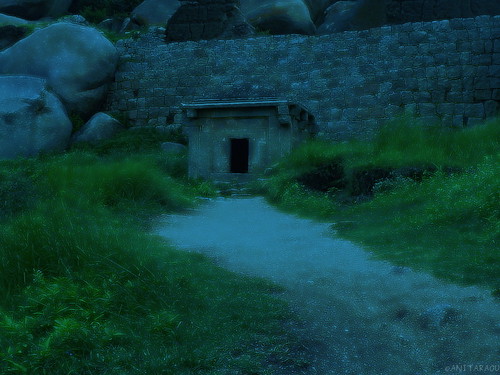 I think this is the darkest the picture has been, and the most highlighted the path has ever been, and I feel that together, they skew the shot somewhat. Well, I’m consoled by the fact that I at least got the night effect that I was aiming for… 🙂

I duplicated the image layer in Grain extract mode at 65% opacity, and applied ‘Difference of Gaussians’
edge detection on it. (Yes, I’ve used edge detection for an earlier version too, albeit with different settings. I think I’ve to make a conscious decision to not use it much next time.) I then added a layer in Multiply mode at 85% opacity, and filled it with blue. Finally, I added a layer in Soft light mode, and filled it with white — that brightened the scenery and made the glow on the stone, the grass and the path more prominent. Evidently, I like how that glow turned out! 😀

The original version is very, very similar to the first photograph (I did minimal editing there) so I’m not going to post it this time. However, if you’d like to tell me which of these four versions you like most, I’m all ears!

Yet another week, yet another post for the One Four Challenge series hosted by Robyn. 🙂 I continue from last week‘s photograph of a path to a structure at Chitradurga that I processed as a monochrome of stony (and other) textures.

This time, I’d thought of bringing the focus to the grass and plants abundant around the structure. What I’d wanted was to highlight only the grassy colors in the photograph, and make the rest of the picture subdued. The grass in this photograph, though, is vague and hazy at most places, and really distinct at some other spots; and no matter what I did, the colors either did not stand out much from the rest of the scenery, or stood out so much that it marred the picture. So I decided that I would deviate from the original plan and instead, introduce splashes of color to the plain, boring green that I’d wanted to highlight. 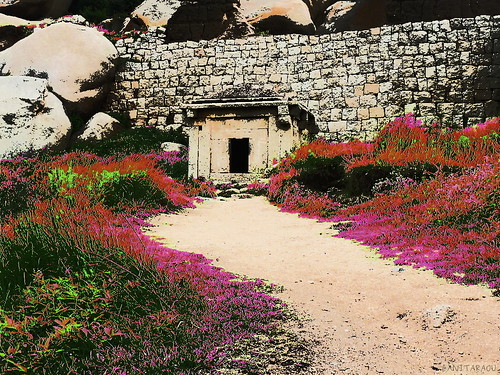 After playing around in GIMP, this is what came closest to what I had in mind. Now the color splash makes the picture reminiscent of spring, and not the original cloudy, rainy day! 😛

I duplicated the image layer in Value mode at 65% opacity, and mapped it to two tones with a threshold that I liked the result of. This gives a black and white image — not with shades of gray, this has just the two colors black and white. (The higher you set the threshold, the blacker the image is.) Let’s call this Image #1.

I then duplicated Image #1, restored the black-and-white layer to 100% opacity, and merged both layers into one. I selected all of the green colored areas in this layer, and filled them with bright green. I then copied the selection and pasted it as a new layer in Image #1 in Grain extract mode at 65% opacity. The pink had already started showing! 🙂

I now selected the opaque areas in this layer again. (An easy way to do this is to select by color, since all of the opaque areas are bright green now.) Keeping the selection intact, I shifted focus to the original (bottom-most) layer. I copied the selection from here and pasted it as a new layer in Burn mode at 85% opacity to make the reds emerge. Done. 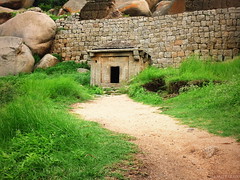 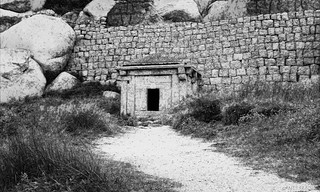 This post continues from my first entry for this month’s One Four Challenge hosted by Robyn. This time, I wanted to focus more on the stone of the structure itself, and the stone wall behind it. I know — this, when the title for this series is ‘The Path.’ Well, what can I say? 🙂 Only that the path will still feature in all of the pictures this month; taking it away makes the picture look incomplete to me. 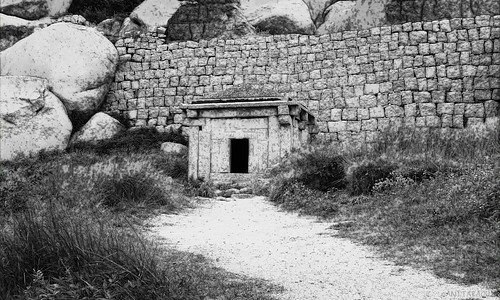 During some very fun experiments, I found that I liked this monochrome version. Well, that means I’m also submitting it to Leanne Cole and Laura Macky’s Monochrome Madness series, hosted at Leanne’s. Of course, this picture looks very processed, and that’s alright. I like the sharpness of the stones in the wall and the altered texture of… almost everything, really.

I’m mostly on Linux, and I use ImageMagick for simple processing, and the impressive GIMP for anything that deviates from easy with ImageMagick. For this picture, I cropped the image at the bottom for a 5:3 aspect ratio, and converted it to grayscale. To exaggerate the texture, I added a duplicated layer above it in Divide mode with 50% opacity. I embossed this layer, performed edge detection using Prewitt Compass algorithm, and applied a Gaussian blur to soften the edges slightly.

This month, I’m participating in the One Four Challenge hosted by Robyn. In short, this challenge involves processing a photograph four ways, and posting each week about each kind of processing that we did. And I’ve decided (after a very quick search) to use this photograph of an unknown structure and the path leading to it. I clicked this on a cloudy-and-rainy day at the Chitradurga Fort, a historical site in Karnataka, India. 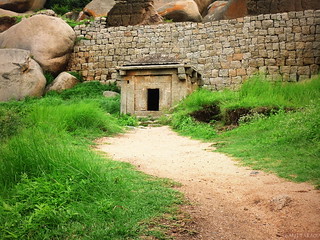 This time, I’ve done precious little in terms of processing. I brightened it some and added a bit of contrast (the usual), then added a semi-transparent layer of sepia for the slight brownish tinge.

I have to admit that I only have a couple of processing ideas for this photograph so far. (Shhh!) I’m hoping that inspiration strikes at the right moments. 🙂 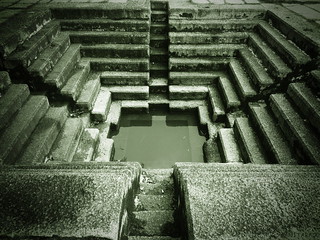 The Chitradurga fort is a historical spot in Karnataka (the Indian state which has Bangalore for its capital city.) I visited the place with friends sometime back, and I was pleasantly surprised by the relatively clean state of the fort when compared to other historical sites in India. It may be because of the relatively low number of tourists visiting — there’s pretty much nothing else touristy near the fort — but it certainly is not because the visiting tourists are highly responsible.

Take this stepwell we ran into, for instance. These used to be common in olden India, used to collect rainwater for later use. This stepwell is such a beautiful structure, but I had to go round and round to find a spot that has the least amount of garbage showing. This, in spite of garbage bins present all over the fort. I finally ended up photoshopping a huge plastic bottle and smaller debris out of the photograph.

I wish we would stop spoiling the places we visit. It doesn’t take much to carry small bags to collect our garbage and dispose of them when we get back home.

On a happy note, I had fun experimenting with different monochrome variations of the original photograph for Leanne Cole and Laura Macky’s Monochrome Madness series.